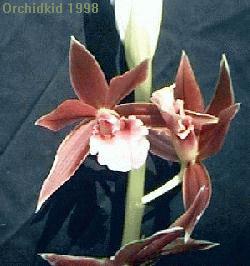 A genus of large, mostly terrestrial plants, Phaius is composed of some twenty species that produce tall spikes of showy flowers.

Phaius species inhabit tropical Asia, into China, Japan, Australia, and west to Africa and Madagascar. The most commonly cultivated is P. tankervilliae (syn. grandifolius), which has been in continual western cultivation since 1778, when the first plants were imported from China. P. tankervilliae is a deciduous, terrestrial orchid, which is more commonly known as the "Nun's Orchid" or the "Veiled Orchid".

Please realize these cultural instructions are general and should be adapted to the cultural environment in which they are to be applied..

Phaius species should all be grown as terrestrial. In sub tropical areas, Phaius can be grown out of doors in flower bed situations. If grown in pots, Phaius should be grown in a well drained media, as they are intolerant of stale conditions at the roots.