The parents of this hybrid is Cattleya Gene May x Brassocattleya Maikai. The grex is named after our former daughter-in-law IVY WILLIAMS, mother of our second grandson, JORDAN. Deep lavendar spots overlay on a light pink background. A spade shaped lip, deep purple, with a white throat with small lavandar spots. Most of the grex blooms with five to six star shaped flowers, per inflorescences, which are 7 inches in natural spread. Taking after the Maikai parent, this grex blooms several inflorescences at a time. Has a faint fragrance in the evening. 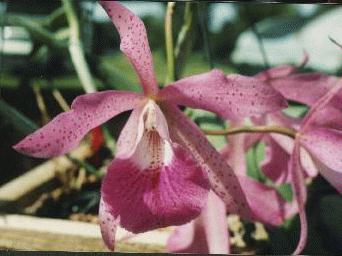 AWARDS:
1) In Houston, Texas, on November 18, 2000, a clone of this grex was awarded a Highly Commended Certificate (HCC) of 79 points, by American Orchid Society Judges. The awarded plant was given the clonal name of "Charmar".

2) Two weeks later, on December 2, 2000, another clone of this grex was also awarded another HCC of 79 points in Layfayette, LA. This awarded clone was given the clonal name of "Jerry's Gift". A color photograph of this clone appeared on the back cover of July 2001 issue of the Awards Quarterly of the American Orchid Society.

5) On September 21, 2002, Another clone was awarded a HCC of 77 points at the Wisconsin Orchid Society Show, at Milwaukee, Wisc., This plant was given the colonal name of 'Hihimanu'.

6) On December 2, 2006, Another clone was awarded a HCC of 76 points at the Niagara Frontier Orchid Society Show, at Buffalo, NY., This plant was given the colonal name of 'Cloud's Spotted Leopard'.