From the Greek phalaina ( a moth ) and opsis ( looks like ), referring to the moth like appearance of some of the flowers. The genus was established in 1825, by C.L. Blume, in his Budragen.

Moth orchids or Phals, as Phalaenopsis are often also called, are monopodial plants. Monopodials (one footed) grow as a single stem with each new growth originating from the apex (top) of the plant. Monopodial growth is characterized by the unlimited growth in length of the stem, combined with the entire absence of pseudobulbs. Leaves are distichous (alternating in two opposite ranks), flat and keeled on back side (strap leave). Phals, as they are more commonly called, are closely related to members of the Vandaceous Orchids. They readily hybridize with other members of the Vandaceous alliance.

The genus has some 50 species. The range of this genus is from India, through Southeast Asia, north to the Philippines, and South to Northern Australia. The species are epiphytic (growing on plants) or lithophytic ( growing on rocks) and inhabit areas from sea level to 1000 feet. Sharing similiar cultural requirements are the genera Doritis andParaphalaenopsisa terete leaved genus. There are over 50 man made hybrid genera, with Phalaenopsis in the parentage. 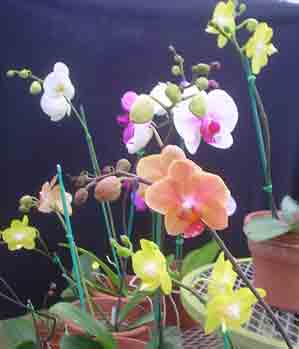 Phalaenopsis are low light orchids; they will grow and flower reliably in natural or artificial light as low as 300-500 foot-candles(fc). However, 1000 to 1500 fc is the perferred level. To test for the correct light level, place your hand between the source and the phal. If the shadow of your hand is fuzzy or indistinct, then the light is sufficient. If the outline of the shadow is sharp, then the light is too bright. If introduced to the brighter conditions gradually, Phalaenopsis can be grown in lower Cattleya light. For Phalaenopsis, morning sun until 10:00 AM, will be tolerated, but protection from the sun after that time is necessary. Unless protected, during the hottest part of the day, the flattened leaves will burn. Lime green colored foliage is an indication of improper light. In Phalaenopsis, dark green foliage is indicative of the perfect light. Yellow colored foliage indicates too much light. However, hybrids of Phalaenopsis involving sun-loving genera as immediate parents must have brighter light to bloom well.

Phalaenopsis enjoy frequent watering year around. Like their Vandaceous cousins, Phals have only their leaves and stems to store water. At their roots, Phals like to be damp year around, but not soppy wet. The foliage must stay dry, or you invite possible rot problems. The frequency of watering is relative to the container, the temperature, air circulation, and the amount of water retained in medium in the container. Watering should be done, so the roots are never allow to dry out. In the warmer periods, several waterings a week may be necessary. The use of peat based "mud" mixes can extended the watering period, but close watch must be maintained to avoid soggy conditions in the pot leading to root rots.

Phals are "heavy" feeders, particularly when in full growth. During the Spring through early Fall, fertilizing every seven days, with several clear waterings in between, will make your Phal plants very happy. In the late Fall through Winter, a light feeding once a month will suffice.

Use 20-10-20 or Orchid Plus 20-14-13 with coconut chips, tree fern, charcoal, or various inorganic aggregates, but use 30-10-10 with fir bark, as the microbes destroying your bark need more N in their diet.These formulations not only provide strength for the new growth, but support for the flowers.

The peat based combinations, such as ProMix®, often have supplemental fertilizer, so somewhat less fertilizer should be used with this medium. Whichever formula is selected, we recommend half strength at each application. As with most Orchids, Phalaenopsis roots are sensitive to fertilizer salt build up. Phalaenopsis are particularly fond of organic fertilizers, such as fish emulsion and manure teas.

After the blooms fade, you may:

1) Cut the bloom stem back to the base, with a hot knife or shears, then apply a broadbase fungicide such as Physan20, Dithane M-45, or 50% Captan . The old stem is still living tissue and can become infected with fungus, thus threatening the Phal.

2) Try to initiate a re blooming, see below under PROPAGATION, or

3) Allow the bloom spike to dry naturally, then break it off at the base. Waiting until the spike is dry, precludes possible fungal infection in the old stem.

Repotting Phalaenopsis often initiate a growth cycle. Many hobbyists recommend at least a yearly repotting, if the medium is still good. An immediate repotting is necessary, anytime the medium breaks down and starts holding too much water. The best time to repot Phalaenopsis is as new growth starts. After removing the plant, shake off all the old potting medium, and remove the dead roots. If the roots are white and firm, they are healthy.

Plastic pots and clay pots are the most popular container. Hardwood baskets, and driftwood, with moss pads, can be used, but more frequent watering will be needed.     The potting medium must be well-drained, but retain enough water to keep the roots moist. At the same time, the medium must allow ample air to the roots. New Zealand sphagnum moss, Long fibered moss, and peat based mixtures are popular. Coconut chips and Fir bark can be used, as well as aggregate combinations. The watering frequency must be adjusted to offset the faster drying time.

When you purchase a new plant, always place it where you can watch it for a couple of weeks until it is acclimated to your area. Initially, water the plant thoroughly and place it in a bright location with good humidity but out of drafts.

Phal plants are highly susceptible to crown rots. The fungus causes cellular collapse and rotting of roots, pseudobulbs and leaves in quick succession. First symptom is likely to be yellowing of leaves. Plants infected should be immediately removed from others. This disease has been known to wipe out a whole section of plants in a day or two. Dip plants into a fungicide solution according to directions. You should always avoid water in the apex of the plant, particularly during cool weather or extended rainy periods. Water early, so the crown area will be dry before the cool of the night. Tilting the pot slightly, will help water run out of the crown. During cool, rainy periods, an application of Physan20, Dithane M-45, 50% Captan, or Kocide 101 fungicide to the crown will prevent rot. If growing outside, during rainy periods an occasional application is a good preventative measure also. Several applications may be necessary if the cool, rainy period is extensive. The fungicide dries in the crown and forms a protective layer.

A preventative spraying of Orthene 75%, wettable powder or in aerosol, on maturing flower buds will prevent insect damage, particularly aphids and thirps. If thirps are found on the open flowers, the same chemical can be used to eradicate the infestation, without damaging the flowers. Other insecticides WILL damage the flowers and should not be used. Use Orthene spray as recommended on the label. If using the aerosol, spray from at least a foot away from the flowers. In addition, Orthene 75% does not leave any unsightly residue.

Botrytis fungus will quickly ruin flowers of Phalaenopsis. with its ugly spots. The best defense against Botrytis is good air circulation, and keeping the flowers dry during cool, damp periods. The fungus is not threatening to the plant, it just causes unsightly damage to the flowers.

Phalaenopsis can be vegetatively propagated by two methods. The first method is by cutting the flowering stem above a stem internode, the dormant growth "eye" is covered with a triangular sheath. Cut, with a hot knife or shears, through the flower stem after the last flower has fallen. Then move the plant to a dimmer area. In most cases, new plants will start from the dormant "eyes ". After the new plants initiate, the the mother and "keikis " (babies) can be move gradually back to higher light. When the keikeis have 2-3 " roots, the "keikis " can be removed, by slicing between the the stem and the keikei, or cutting the stem above and below keikei's attachment point. The new plant can now be potted up and grown on. If more flowers are desired, cut the stem as above, but do not move the plant. In the second method, the mother plant is topped. As a monopodial plant, Phals continue to grow vertically. In time, they discard their lower leaves. The leaves have served as a storage vessel of water and nutrients. The leaves have outlived their usefulness and are discraded. New roots are produced above the leafless stem, as the Phal continues growing vertically. The stem can be cut below the new roots. The top part, with leaves and roots, can be repotted after proper care of the cut. The remaining stub can be left as is, for a few days/weeks. Soon, new little plants will be found growing out of the old stub. These keikeis can be repotted in the same manner as the first method. They will grow on and eventually bloom. If left on the stub, they will often bloom sooner, than if individually potted.